I could eat a donut everyday.  I love going to the donut shop and seeing all the pretty donuts lined up in the glass case.  My love for donuts might be amplified right now by my pregnancy, but even before I still loved them.

I like to try all the different donut shops in town.  My favorites are the locally owned, mom-and-pop type shops.  My current favorite is a family-owned shop not too far from my house.  They only make yeast donuts, and they have the softest, fluffiest donuts you have ever tasted.  The shop is almost always busy and forget going after 9am.  There won’t be anything left!  The family that owns the shop is so nice and friendly.  Once when I wanted a filled donut and they didn’t have any, the woman took an unfilled donut in the back and filled it for me right then.  Now that’s service!

Naturally, my love for donuts has lead me to want to make donuts at home.  I had never actually attempted it, but when Keri at I Eat Trees posted her recipe for Baked Vegan Donuts with Lemon Glaze a couple of weeks ago, I knew I wanted to try them as soon as possible.  The pictures on her post are mouth watering.  I set out to make these homemade donuts last Sunday morning.

But sadly I do not own a Donut Pan

.  😦  I considered buying one, but I’m currently trying to de-clutter my life and not bring more stuff into my home.  Except for baby stuff which will soon be entering in mass quantities.  So I decided to use a muffin pan to create “monuts”, which is a donut in the shape of a muffin.  (I considered naming them duffins, but I think monuts has a better ring to it.)

I followed the recipe exactly to mix the dough.  It was much stiffer than I expected it to be.  Then I divided it up into a 12 cup muffin pan to bake.  I had to bake the monuts longer than the 8-9 minutes the recipe suggested.  At least 15 minutes I think, or until a toothpick entered in the center came out clean.

After giving them some time to cool, I popped them out of the pan onto a wire rack while I mixed the glaze.

I topped half of the monuts with a half recipe of the lemon glaze that Keri suggested.  Benzo is a big fan of lemon.  But I am a big fan of chocolate, so I topped the other half with a simple chocolate glaze.

The monuts had a really nice, subtle spice to them.  When I was mixing up the dough I thought they smelled like the donut shop. 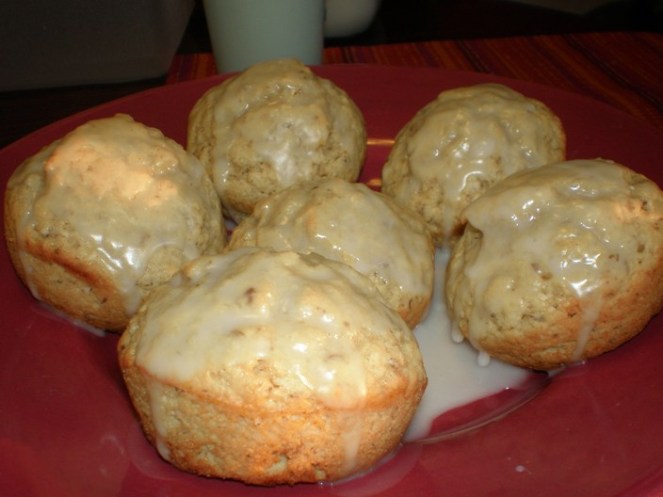 Strangely I liked the lemon better!  The lemon flavor seemed to go better with the dough.  The chocolate ones were good, but I think there’s a better recipe for chocolate glaze somewhere out there.  This glaze served its purpose because I needed something really quick, but next time I’ll take a bit more time. 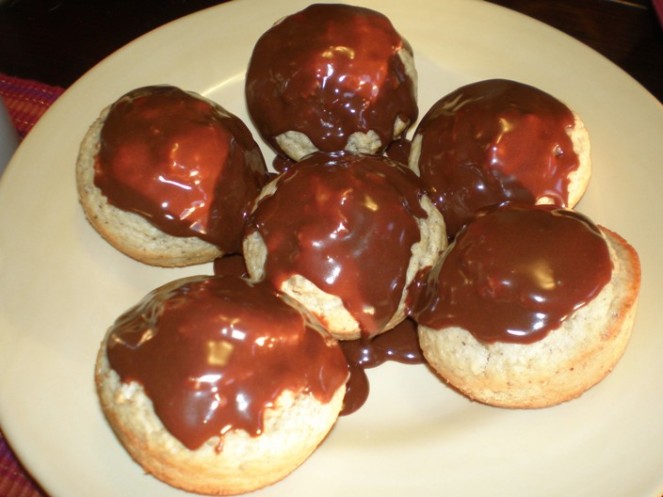 All in all, Benzo and I really liked the monuts.  BUT we didn’t think they tasted like donuts you get from the donut shop.  It could be that I usually have yeast donuts and am not used to a cake-type donut.  Or it could be my brain playing tricks on me since the monut is not in a traditional donut shape.  It doesn’t really matter though as long as it tastes good!

Here are a couple of other homemade donut recipes I would like to try:

So last night we ended up going out for dinner for Valentine’s Day and using our giftcard.  Benzo was surprisingly able to get us a reservation at 6:15.  We had a really, really nice dinner including the best bruschetta appetizer I have ever had.  We even decided that it was probably cheaper for us to go out to eat since we were using a gift card than cooking at home because we probably would have bought something special to eat or some kind of special ingredients we wouldn’t normally buy.

We decided to forgo the movie.  We didn’t want to be out too late on a work night and there’s not much out that I want to see other than The King’s Speech (and none of those times worked).  So we did what any other couple would do instead – go to the baby store!  Hahaha.  The baby store is actually right by the restaurant so we went over there mainly to look at strollers.  I wanted to mess around with some strollers to see which one I liked best.  We want a jogging stroller and were able to decide on one we liked.  I even jogged up and down the aisle with it to test it out.  I’m very much looking forward to getting back to running this summer.  It’s been unseasonably warm this week and I’ve been so jealous of all the runners I’ve seen out and about!

2 thoughts on “Monuts: The Muffin Donut”