Happy day after St. Patrick’s Day!  Did everyone have fun last night?  A little tooo much fun maybe?  😉

Benzo and I had a quiet evening at home with lots of yummy food.  And most of it green!

Then I made a pasta dish.  We had half a jar of homemade pesto that needed to be used up and I figured I would throw in some other green ingredients that we had on hand like peas and edamame.  I cooked the pasta and then tossed it with about 1/4 cup pesto and the frozen peas and edamame (warmed up in the microwave first). 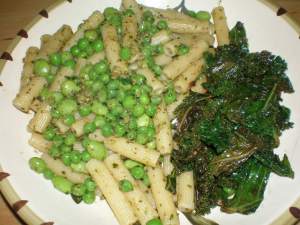 On the side I made some sauteed kale.  Kale was on sale last weekend at Whole Foods.  Two organic bunches for $3.00!  I used about half a bunch for two people.  First cut large, tough stems out of kale leaves and then chop into bite size pieces.  Heat about a tablespoon of olive oil in a skillet.  Cook one clove of garlic for 1-2 minutes.  Add kale leaves and stir to coat.  Cover and cook a few minutes until wilted slightly.  Drizzle with about one tablespoon of balsalmic vinegar, stir to combine.  Cover and cook for another minute or two.  This is pretty similar to sicilian collard greens from The Kind Diet

I wasn’t expecting much because the goal was to eat lots of green foods, not to make an award winning meal.  However I was pleasantly surprised by how great this dish was!  Pesto of course is good on pretty much everything.  The kale was a winner too.  Benzo and I both liked it and agreed we should make it again.

Now for dessert!  I hadn’t made them in forever so I made CUPCAKES!

I started with these basic chocolate cupcakes.  This time I used half white and half whole wheat pastry flour and also added 2 tbsp ground flax to the dry ingredients as Chelsea suggested in the comments.  I also used peppermint extract as the additional flavoring.  These cupcakes are SO easy to make.  I actually whipped them together before dinner in about 15 minutes (not including baking time).

I can’t take credit for this idea though.  I was actually googling Guinness cupcakes and found the idea for Baileys buttercream on Confessions of a Tart.  It looks like she found the idea on Smitten Kitchen.  Both blogs have gorgeous pictures!  Much better than mine: 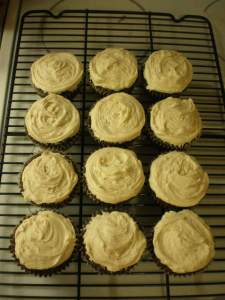 I had to use about 6 tablespoons of Baileys to get the frosting creamy enough to put on the cupcakes.  And even then it was still a little stiff but I had run out of Baileys so I just went with it.

They still turned out ah-ma-zing.

These cupcakes are so moist and delicious.  Why am I not making them everyday? 😀  Benzo and I each ate two last night!

For my vegan friends, I don’t think Baileys is vegan-friendly since I’m pretty sure it has cream in it.  However, here’s a recipe for vegan Baileys.  And here’s another recipe with a little bit different ingredients.  Now that my Baileys is gone I have an excuse to try these!

So what did you do for St. Pat’s?  Eat green food?  Drink green beer?  Party all night?