Play silks are exactly what they sound like – big pieces of silk you play with.  I ran into the idea when I was searching for non-toy gift ideas for toddlers and preschoolers in December.  I found a great list on Nourishing Minimalism, and #16 was play silks.  I had never heard of play silks before but they sounded really fun and a great way for kids to use their imagination.  With two boys, I imagined we would use them as capes, pirate head scarves, tents, blankets, etc.

on Amazon.  They looked beautiful but a little pricey at $14.50 a pop.  I figured we would want at least four of them in various colors.  So I took to Pinterest and found several blogs explaining how to dye plain silk with Kool-Aid.

I ended up going with the method on Tao of Craft.  First I had to acquire some silk.  I ordered the 35 x 35 machine hemmed 8mm Habotai scarves from Dharma Trading Company.  I ordered six of them and at $6.09 each they were much cheaper than the ones on Amazon.  And shipping was really fast!

The method is simple and you can get the instructions on Tao of Craft.  All you need is hot water, white vinegar and dye.  You can use either Kool-Aid or Wilton gel paste to dye your silks.  I already had blue and green Wilton gel paste on hand so I used them for two of the silks and then I bought red, purple, orange and yellow Kool-Aid for the remaining four silks.  I went with Kool-Aid for the rest just because it is cheaper, but if I were to do this again I would use the gel paste for some of the colors as you’ll read below.

You have to hang the silks to dry once you are all done so due to space limitations, I dyed three silks one night and three the next night. The process was really easy and it was fun to try something new. 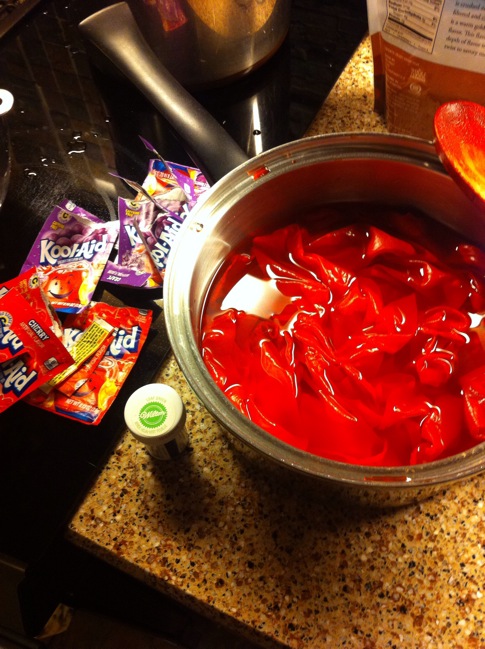 But I will say that during the cold water rinsing part, I never actually got the water to run clear.  I finally just got tired and gave up, squeezing as much water out as I could before hanging them up to dry.  I hung them in my unfinished basement so if any colored water dripped on the floor it was no big deal.

Since this was a gift, I didn’t do this with my kids, but I think it would be a fun project to do together.  Here are all six getting wrapped up for Christmas:

All folded up they look great, but when you spread them out, each silk has a somewhat mottled or “tie dye” appearance.  This was not intentional but it doesn’t bother me.  I hung up the silks in the sun to try to get some good pictures of the colors. 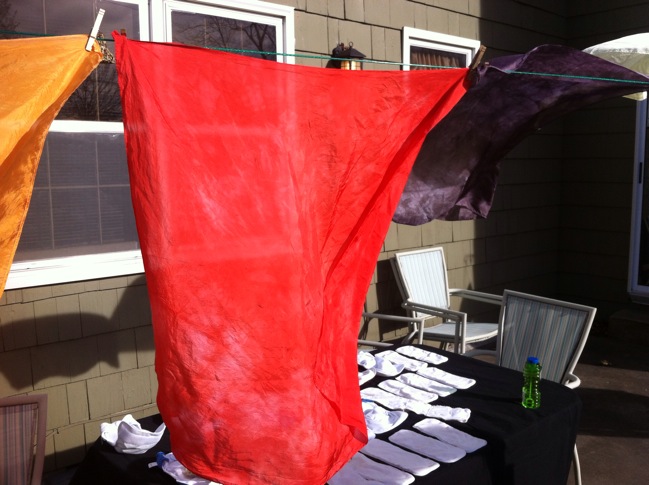 I was very happy with how the red turned out using red Kool-Aid.  The color is very vibrant.  Don’t mind the cloth diapers sunning in the background…

I didn’t really care for how the purple turned out though.  It’s hard to tell in the picture but the purple is a much duller color.  Think of grape Kool-Aid.  It’s not a bright, vibrant purple when you mix it up in a pitcher.  It’s more of a dull, dark purple.  That’s exactly how this silk turned out.  If I were to do this again I would use the gel paste for purple.  The sun makes it look better than it really is.

I did use a “sky” gel paste for the blue silk and it turned out great.  We use this silk as “water” when playing a fishing or camping make-believe game. 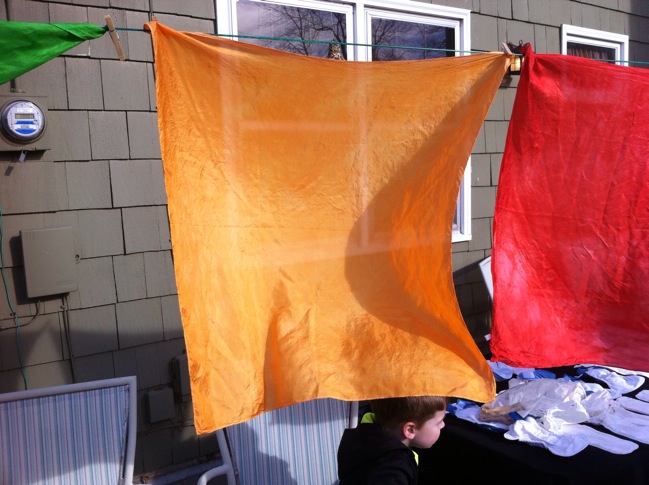 The orange silk was the best one of the bunch.  It has the least amount mottling and is very nice and bright.  The Kool-Aid worked great for orange.

The yellow silk turned out to be a very, very pale yellow.  Again when you think about lemonade Kool-Aid mixed up in a pitcher, it’s not a bright yellow color.  If I were to do yellow again I would splurge on the gel paste in a nice bright yellow color. 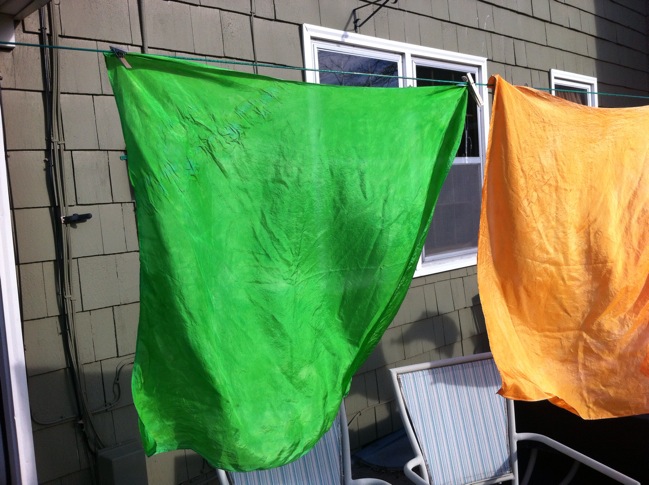 The green silk turned out beautiful!  This was another one that used the gel paste and I love the way it looks.  The green silk is our “grass” in make-believe games.

My boys have enjoyed the play silks over the past few months.  We frequently use them as superhero capes (including Mom and Dad) and run around the house in them.  Then just the other night we tied them all together in a big long rope and drug it around the house.  It’s fun to see their little minds come up with different ideas for the silks.

I think these would make a fun DIY birthday gift for a cousin or friend or a party favor for guests!  And it would be a great project to do in the spring or summer because you could dye them outside (no fear of spills or stains!) and you can also hang them to dry outside on the line in the sun.