Several years ago I posted about homemade eye makeup remover that was simply canola oil. I used it for awhile with success but eventually gave it up because it was, well, too oily. I switched to just scrubbing my eye makeup off with my face soap but then that seemed too harsh for the delicate eye area.

I went back to eye make up remover but used the store bought Target brand.  I really liked how it worked until I turned the bottle around and checked out all the unpronounceable gunk inside.

Back to the homemade eye makeup remover drawing board.  I searched around on Pinterest and the interwebs for ideas.  I knew I wanted something that was simple and could be made with ingredients I usually have at home.  I didn’t want to have to buy a bunch of new stuff that would end up cluttering my bathroom.  I’ve found that with homemade stuff, simple is better.  If a homemade beauty product requires 8 different ingredients and takes 30 minutes to make, there’s a very high likelihood I’ll never keep up with it.  I mean who has time for that?

I finally found a great post at Whole New Mom that talks about different kinds of homemade eye makeup removers.  The recipe she ended up with is equal parts oil, witch hazel and water.  All ingredients I normally have at home!  (Benzo uses witch hazel as an astringent on his face, so we already keep that in our bathroom.) 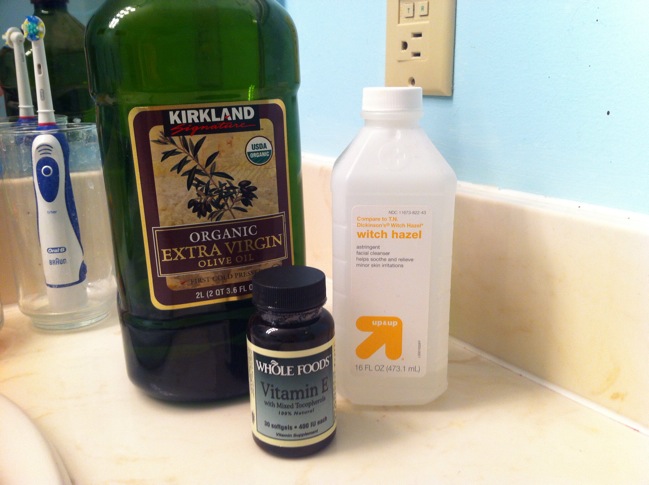 In a measuring cup with a spout I add one ounce each of water, witch hazel and olive oil.  I use olive oil because it’s what we already have at home.  If you’ve never bought witch hazel before you can get it at Target near the rubbing alcohol.  I like to make just a small amount (3oz) each time so I don’t have to worry about it going rancid on me before I use it all.  The three ounces lasts me around 2-3 months.

The water and witch hazel cut down on the oily-ness and the salad-y smell of the olive oil.  In my previous post on eye makeup remover I said that I didn’t like using olive oil because of the smell.  The witch hazel helps a lot with that.

I also squeeze two Vitamin E capsules into the mixture for some extra soothing on my eye area.  I already had Vitamin E from other homemade beauty product project. 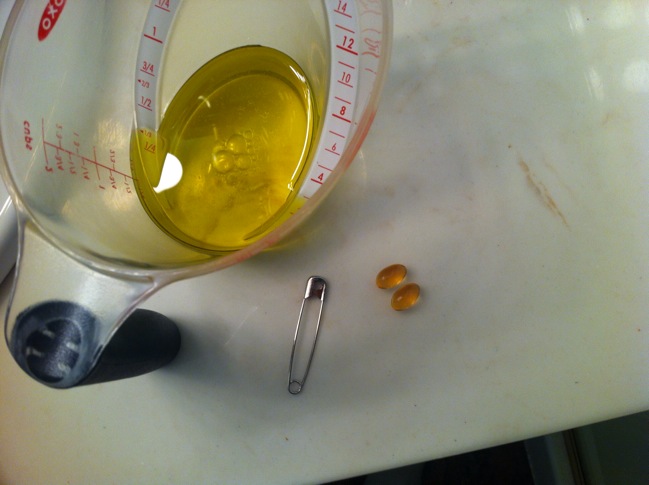 I still use the Target bottle.  I just rinse it out and pour the new stuff in.  The oil separates from the liquid so you have to shake it up before each use.  But that is standard with store-bought makeup remover too. 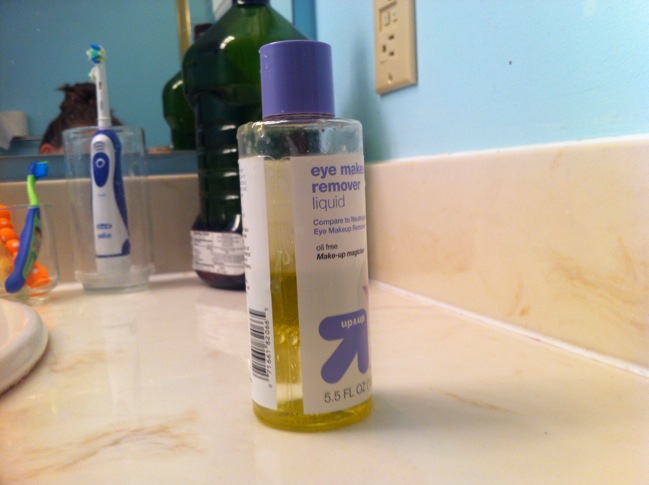 I’ve stuck with this recipe for a year now and still going strong.  It works like a charm and is quite simple to mix up whenever I run out.  And much better for my face than store bought.  It’s exciting when a homemade product works out isn’t it?