A couple weekends ago I was up early before anyone else was awake and decided to make biscuits and gravy.  I had been saving two apple-sage Field Roast sausages specifically for this purpose.  First the biscuits:

The recipe is a pretty standard biscuit recipe using Earth Balance and soy milk to make them dairy-free.

This was the first time I actually rolled out the dough and cut out the biscuits.  I usually just make drop biscuits because I’m too lazy to cut them out.  Surprisingly it didn’t take that long so I’ll probably start cutting them out more often.  I did roll most of them a little too thin so I ended up with quite a few biscuits.  Next time I’ll make them thicker.  The two in the upper right corner of the picture that split in the middle were perfect.

Next up is the gravy.  I used a recipe from I Eat Trees that I have made several times.  But I like my gravy more soupy and less chunky so I only used two Field Roast sausages where Keri calls for four.  I also didn’t have worcestershire sauce so I used a spash of soy sauce and a couple drops of liquid smoke. 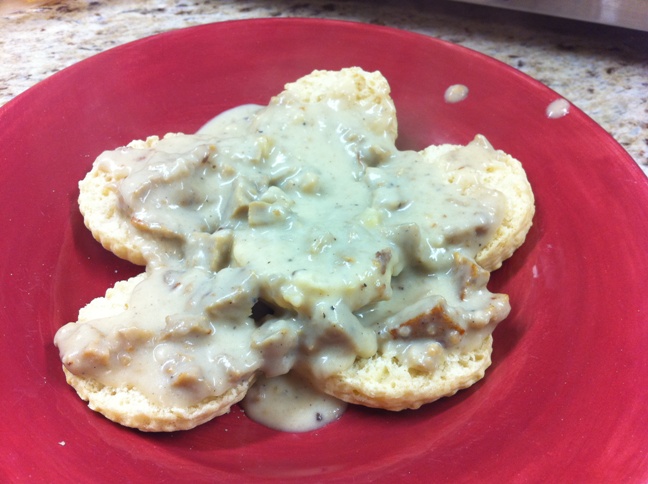 Lord it was brilliant.  Might have been my best homemade biscuits and gravy yet.  The apple-sage Field Roast really makes the gravy.  You’d have thought I hadn’t eaten for a week the way I scarfed it down.  Benzo and I ate every drop of gravy and almost all the biscuits.  Serves four?  Not in this house.  😉