I love to eat oatmeal all through the winter.  It’s so simple and comforting.  But alas!  It’s starting to feel like spring outside this week!  Yesterday I went out for a fun lunch with my friend and I was soaking up the sunshine on the drive to and from the restaurant.  On the way back I even cracked my sunroof a bit even though the temperature gauge said it was only 47 degrees F.  Felt like a heat wave to me.

This weekend is supposed to be in the 50s.  I would like to get in a longer run outside on Sunday.  That would only be the second time since 1/1 that I’ve been able to run outside!  And hopefully these warmer temperatures and sunshine are warming up the soil enough so I can get get out to the garden and start putting in some spring veggies in a couple weeks.

But back to the oatmeal.  Oatmeal can be made a zillion different ways and it’s fun to come up with new variations. I actually made this gem last weekend, and I’m only just now getting around to sharing.

1/2 cup old-fashioned oats
1 cup water
Dash salt
1 tbsp of ground flax
1/2 tsp ground cinnamon
Frozen blueberries, as many as you like (I think I used about a half cup)
Maple syrup, as much as you like (I used a tablespoon or so)

Bring water and salt to a boil on the stove. Stir in oats, flax and cinnamon and reduce heat to medium. Simmer approximately 5 minutes. Meanwhile, heat blueberries in microwave for 30 seconds to 1 minute or until soft and juices are flowing.  When oatmeal is finished, top with blueberries and juices and drizzle with maple syrup. Stir to combine. Voila!

Here is is pre-stir.  You can’t really see the syrup, but it’s on there I swear. 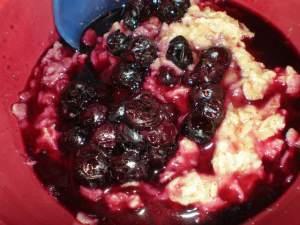 All stirred up and ready to eat. 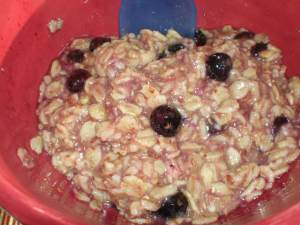 I thought this oatmeal was super-yum.  I’m sure I’m not the first one to think of adding blueberries and maple syrup to my oatmeal, but maybe I’m the first one to declare it “blueberry pancake oatmeal”?  😀  This version is similar to Banana Berry Oatmeal I made in January, but with less stuff.

To avoid an extra dirty dish, heat the blueberries up in the bowl you plan to use to eat your oatmeal.  Then just dump the oatmeal on top of the blueberries when it’s finished.  I only used a separate dish for the blueberries for picture-taking purposes.

I think next time I make blueberry pancake oatmeal I will stir the blueberries in and then drizzle with maple syrup.  That way it will be more like pancakes with syrup on top, instead of having the syrup all mixed together with the oats.