I have developed a cold. It sucks. I’m laying in bed with a box of tissues, watching my all-time favorite movie, My Big Fat Greek Wedding, waiting for my nighttime cold medicine to kick in. I also thought I could catch up on some blogs I have had planned for weeks!

This tiny watermelon has been sitting in the garden for awhile now and I finally picked it the other day.

It was about the size of a softball, a bit larger than a tennis ball.

I wasn’t sure what would be inside when I cut it open. I’ve never seen a watermelon this small. Since it was so small I figured there was no way it had developed properly. I fully expected it to be white inside like my first watermelon. 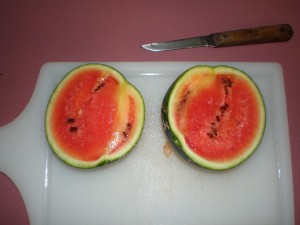 It was actually a little too ripe. I cut it up and got about one cup of chopped watermelon. I don’t think I will actually eat it though. I did taste a small piece and it was only fair. You can’t tell from the picture but it looked a little orange around the edges.

There are a few other small watermelons still sitting in the garden but none this tiny. I need to cut them soon! 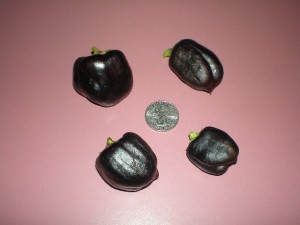 I was hoping to get some purple peppers just a little larger. I cut a few open and they are green inside. I have no idea why they don’t grow larger like the rest of the plants. It could be because the plant is a lot smaller than the other plants. It may also be too crowded. It is in between two much larger plants and an extremely large clump of marigolds. Note to self for next year – more room between plants!