Have you ever had a meal in your mind that you just knew was going to be perfect? And when the perfect idea became reality you were ecstatic?

That was the case with me and breakfast pizza.

I have been wanting to make breakfast pizza for months now. The opportunity finally presented itself last weekend. I got home early on Friday afternoon and decided to make homemade pizza for dinner. We had some vegetarian pepperoni I wanted to try. So I whipped up the dough and made the pizza. It was delicious and Benzo and I ate the whole thing.

But the pizza dough recipe makes enough for TWO pizzas, meaning I had the dough for another pizza just sitting there. I tossed it in the fridge and declared I was making breakfast pizza the next morning. Here’s how I made it but the options are endless here.

Make pizza dough according to instructions. Dry bake crust for 5 minutes and then top with gravy, sausage, eggs and cheese. Return to oven and bake for 10-12 minutes or until crust is golden and cheese is melted.

Benzo used Boca crumbles with some spices to make our vegetarian “sausage”. I then added soy milk and flour to the pan to make a “sausage gravy”. This mixture went on the pizza first, then the scrambled eggs and finally some Daiya mozzarella shreds. 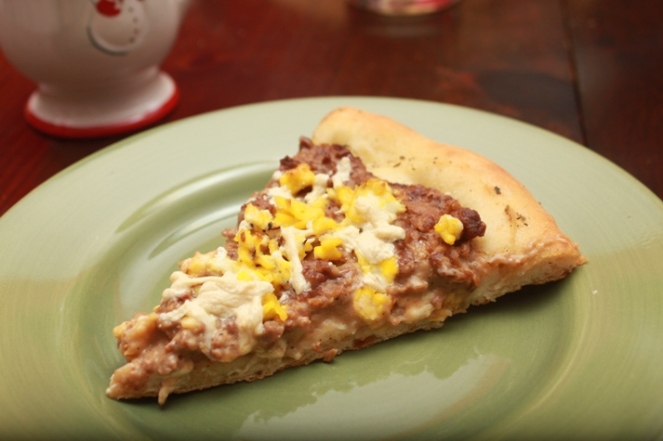 It was insane! We ate the whole thing. Again! Two pizzas in less than 24 hours.

Next time I will use more eggs. I only had three and that was barely enough. I also think some browned hashbrowns would be good or some sautéed spinach and red pepper if you want to get healthy.

Any other topping ideas? Leave them in the comments below.