On most Saturday nights Benzo and I go to a church group at 5:30pm.  It usually lasts about an hour and a half, but then we always end up standing around chatting for another 20-30 minutes.  Sometimes we get there at 4:30 to help set up or if Benzo is playing in the band (he’s a musician) and needs to be there early to practice.

This presents a dilemma when it comes to dinner.  It’s too early to eat beforehand, especially if we are on set-up detail.  And by the time we get home afterwards it feels too late to cook anything.  So we almost always went out to eat on Saturday nights after leaving the church.

With a baby on the way I’ve become a lot more conscious about our spending and how it will probably need to change in the next few months.  The expense of eating out really adds up over time.  Cooking more meals at home can save us a substantial amount of money.  So Benzo and I are starting to cut back on eating out, especially on Saturday nights.  We are going to need this money for daycare.  Do you realize how much infant daycare costs?  Eeeep!

With the time constraints of our church group, the perfect solution to Saturday night home-cooked dinner is a slow-cooker.  I can get it going early in the day and then it is ready and waiting for us when we get home.  And when we know the slow-cooker is on and dinner is ready, we are not tempted to stop at a restaurant or pick up food on the way home.

So yesterday after grocery shopping, even though I was really tired and wanted to take a nap, I took 20 minutes to put together a meal.  I chose a recipe called Tangy Vegan Crockpot Corn Chowder from All Recipes.  I have actually made this one other time, but I didn’t have a lot of the ingredients so it didn’t turn out exactly like it should.  It wasn’t bad, but I just wanted to make it again as it is written to see how it was meant to taste.

The recipe is very easy.  Most ingredients are pantry staples.  Only one was special – red chile peppers.  Luckily some friends had just given us a bag of cayenne peppers they had frozen from their garden last year.  So we used two small ones.  One with the seeds left in and one with the seeds scraped out.  (The seeds are a source of heat, so scraping them out reduces the heat level.)  I was a little concerned about the soup being too spicy, but it wasn’t at all.  I’m a lightweight when it comes to spicy food!

So here is probably the worst picture in the history of this blog.  I do apologize.  It was late and I only had my phone handy. 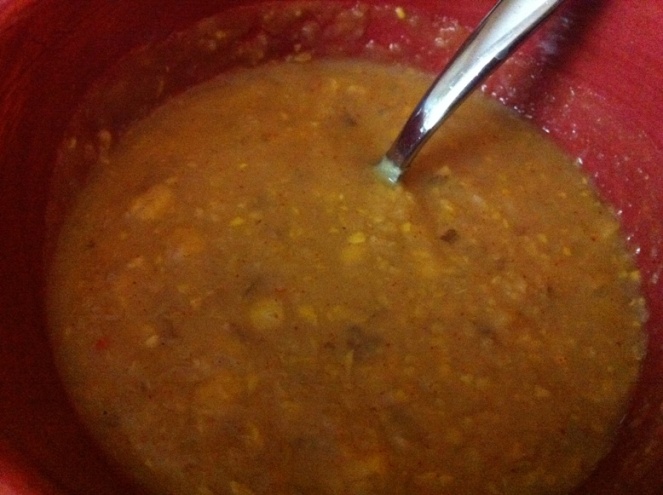 But do you really need to see what corn chowder looks like?  They all kind of look the same, right?

It turned out great!  It worked out perfect to have the soup almost ready when we got home.  We were not even tempted to eat out.  And the taste was very good.  It seemed like an odd combination at first, but I liked it a lot.  Way better than the last crockpot concoction I made.

We did get a full 6 servings out of this batch.  Two for dinner last night, two for lunch tomorrow and two bowls went into the freezer for another time.  That’s good because I usually get less servings than what the recipes states.  Guess I eat a lot?  🙂

After dinner we put Ghostbusters on to watch with the intention of doing laundry at the same time.  But we both promptly fell asleep and missed the entire movie!

Speaking of sleep, it’s late now and I need to get to bed.  Back to the daily grind tomorrow!  If you have a great slow-cooker recipe, please do share it with me if you don’t mind.  I’ll be on the lookout for good ones if I’m planning to do this every Saturday.