So if you read my meal plan for this week you know that I made lettuce wraps for dinner on Sunday night.  I actually found the recipe through the Whole Foods “app” on Benzo’s new iPhone.  Neither one of us has had smartphones before so we’ve been checking out all the new apps.  The Whole Foods app is pretty cool.  You can search for recipes based on dietary requirements and then add the ingredients to a shopping list.  I made about half of the meal plan in the car on the way to the store!

One of the recipes that popped up in my search was Lettuce Wraps with Chile Peanut Noodles.  I thought it looked tasty and not too difficult.  And I’d never actually made lettuce wraps at home before.  All good reasons to give it a try.

Unfortunately one of the ingredients was “dried bean thread noodles.”  I had no idea what that was and after looking around the store for a few minutes I asked an employee to help me find them.  And even with their help the bean thread noodles were nowhere to be found.  This was irritating considering the recipe came from the Whole Foods website!

The recipe came together very quickly which was a major plus.  I washed the lettuce and put some water on to boil.  Then I mixed the peanut sauce in the Magic Bullet and cut up some red onion and cilantro while the noodles were cooking.  Then all I had to do was toss the cooked noodles with some of the peanut sauce and set out the lettuce and toppings.  Benzo and I each built our own wraps.  (I completely forgot to toast some peanuts as another topping.)

Here is a picture of my plate with some hoisin sauce on the side: 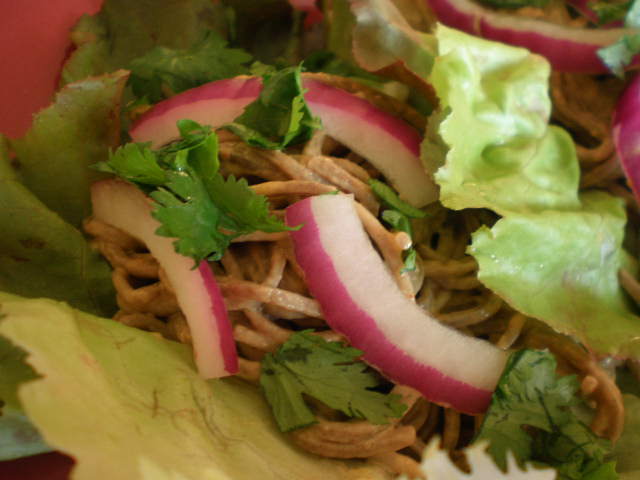 The wraps were good and I really liked the peanut sauce.  It was not too spicy at all.  In fact I may even add more chile sauce next time, which is a testament to the mildness as I am a complete wuss when it comes to spicy food.

One downside to this recipe is that it is not very filling for 2 people.  We definitely needed a side dish.  Maybe Benzo and I just eat a lot, but there’s no way that recipe could serve 4 people as it states.  Maybe it just means for appetizers?

Also if you make lettuce wraps, make sure to get strong lettuce.  I got some wimpy butter lettuce and the leaves did not hold up well at all.  I didn’t really think about that when I grabbed a head of lettuce from the produce section.

I may make this again, and if I do I will definitely make some modifications.  I will make the wraps a little heartier with more vegetables and maybe a protein source (?).  I might make the sauce a little thinner and definitely a little spicier.  I will serve the wraps with a side dish of some sort – any suggestions?

I did use some leftover peanut sauce to make a quick chickpea salad for lunch today.  I had cooked up a bunch of dried chickpeas in the crockpot over the weekend, so I tossed chickpeas, peanut sauce and red onion and cilantro together.  It was a decent lunch.  Nothing too exciting.

Benzo did make homemade limeades to go with our dinner on Sunday, which was a nice refreshing summer treat.

I think all he did was mix lime juice and water and then top it with lemon-lime soda.  I’ll have to ask him how he made them!  Oh and by the way if you compost, make sure to throw the lime slices in the kitchen compost bin.  My compost bin smells like limes now instead of not-so-pleasant compost stank.  🙂