Wow it’s Tuesday already!  I was a lazy bum about blogging last night.  Just wasn’t feelin’ it.  I got home early and Benzo and I mowed the entire lawn.  We have just under an acre so mowing is usually a two person job.  It gets done a lot faster that way.  I usually drive the riding mower and Benzo uses the push mower to get areas I can’t drive into and also does the trimming.  After mowing we made dinner and then watched 24 (my favorite show).  Then I stayed up way too late reading!

On to today’s post.  I have some pictures to share from Unplugged Weekend.  Check out my awesome landscaping: 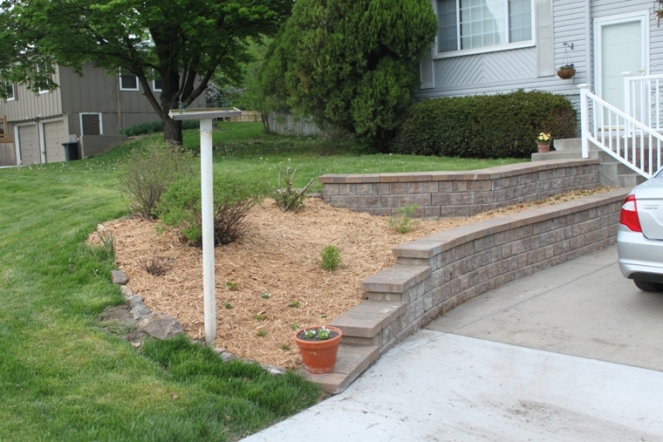 I wish I had a “before” picture so you could see that this is an amazing improvement.  It may not look like much, but it is so much nicer than the weed forest it was before.  The shrubs and flowers we planted are still really small so they are hard to see from far away. 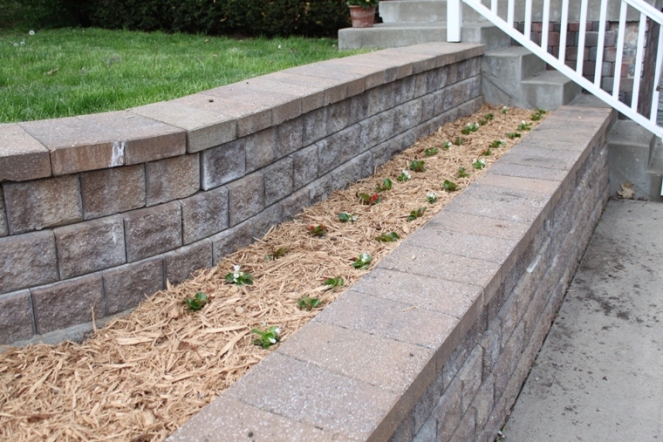 In this section in the above picture are tons of begonias.  As I said before, we bought a lot more flowers than we actually needed.  But I don’t mind because I love begonias.  I can’t wait until they grow bigger.

In the above picture you can see the shrubs we planted.  The shrub at the top that has been chopped down to sticks was already there.  I have no idea what it is but it turns a really pretty red color in the fall so I wanted to keep it.  Benzo just cut it way down because it had gotten a little out of control.

I bet you’ll never, ever guess what the two little bushes are in the front.  Well maybe you might because of the title of this blog.  They are BLUEBERRY bushes!  😀

When we were shopping for plants, I looked and looked at shrubs and nothing sparked my fancy.  Then I spied blueberry bushes and thought “why not?”  I have a perfectly good area to plant them and I’ve wanted to plant blueberry bushes ever since I started my garden.

I first thought about “foodscaping” (that is, planting fruits and veggies right into your landscaping, instead of in a separate garden) when my aunt asked me about planting a garden at her house.  She has no backyard whatsoever, so she was considering putting a raised bed on top of a concrete slab.  I told her I wasn’t sure if that would work or not (though it seems like it would be the same as container gardening, just on a larger scale).  She has a southwestern themed landscape in her front lawn, so I suggested dropping a tomato plant and a hot pepper plant somewhere in the landscaping.  Both plants would fit right in with the southwestern theme.

I have no idea if she actually followed through on my suggestion, but it got me thinking.  Where else in my yard could I drop in some fruit or veggie plants?  Since it was on my mind already, the thought just clicked when I saw the blueberry plants at the store.  And now I have two blueberry bushes in my front landscaping.

I have no idea if the plants will flourish or not.  I’m kind of flying by the seat of my pants here folks.  And I bought these plants on a whim at Lowes instead of at a reputable nursery so I don’t know what kind of quality I’m dealing with.  But even if they don’t produce any actual berries, they will still serve the purpose of shrubbery.  And they only cost about $22 for both of them so it’s not like I’m out a ton of money if they die on me.

After the blueberry plants went in the ground I had a little open area on the corner near the bird feeder pole that no longer has a bird feeder on top.  I seriously debated planting lettuce here, but ultimately decided that I didn’t want to wait for it to sprout before I was able to mulch around it.  BUT next year this may be a prime location for a few varieties of lettuce which I can plant in March, harvest by early June and then fill in with flowers for the rest of the summer.

So instead of lettuce, the rest of the begonias were planted in that space: 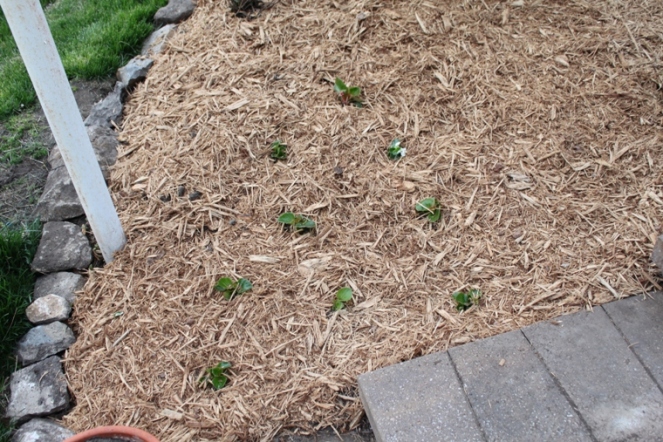 Also around the edge of the bed we lined up medium to large sized rocks that we found in the bed when we were digging out all the weeds.  I think this looks really nice and it kept us from having to buy some sort of edging.  It’s not all the way around yet, so we need to go on a rock hunt at the construction sites down the street to get the rest.

So what do you think about foodscaping?  Are there any areas of your lawn where you might consider planting fruits and vegetables instead of flowers and shrubs?

One thought on “Foodscaping”