The eggplant plants have been producing tons of eggplants this year. I’ve been seeking out eggplant recipes and came across this one for Roasted Eggplant Soup on All Recipes. I’m kind of a soup junkie so I was all over it. I pretty much made it as stated in the recipe except I only used 1/2 cup cream instead of a full cup. I bought a pint of cream from the local dairy farm and it was super thick and rich so I only needed 1/2 cup. Here’s how it went:

Roast in preheated oven until very tender and brown in spots, about 45 minutes.

Scoop out eggplant pulp and discard skin. Slip skins off tomato halves. Place eggplant pulp, peeled tomatoes, onion and garlic in a heavy saucepan with broth and thyme. Bring to a boil over medium heat, then reduce heat and simmer until onion is very tender, about 45 minutes.

I have to take a minute to say that this soup looked completely disgusting at this stage. Eggplant is not attractive when it is cooked.

Puree in pot with an immersion blender, or in batches in a food processor. Return to low heat and stir in cream. Looks much more appetizing! 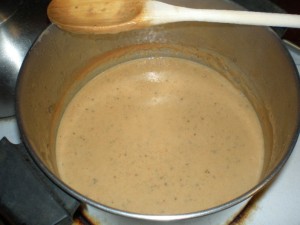 Bring to a simmer, thinning with more broth if necessary. Season with salt and pepper. Ladle into bowls and sprinkle with goat cheese.

The result? It was pretty good. It took a really long time to make though. The texture of food is also very important to me and in this soup the eggplant seeds bothered me just a tad. But not enough to not eat the soup. I really liked the goat cheese part too. I froze a couple bowls of this soup (pre goat cheese) and it did well in the freezer.

Honestly I don’t know that I’ll make this soup again. And that’s not because I didn’t like it or anything. It was good but it wasn’t so good that I see myself craving it. I’m going to hang onto the recipe though. It might end up being one of those “once a year” recipes that I bring out when we have more eggplants than we know what to do with. Kind of like the Mexican Zucchini Casserole I made several weeks ago. 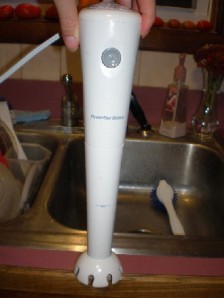 It was extremely cheap. I got it on Black Friday a few years ago for $5. It works great. I don’t use it all the time, but when I do, boy am I glad to have it. It doesn’t take up much space in the kitchen so I don’t mind having it around when I don’t use it frequently.