I saw a recipe for homemade slime on Pinterest (of course) and thought it would make a fun DIY gift for my boys for Valentine’s Day. I had never made anything like it before and since my 3 year old loves Play-doh I figured he would like slime. It seemed simple, only three ingredients other than add-ins, so I thought it would be an easy, no-stress project.

Wrong. The three ingredients are water, glue and liquid starch. Water and glue are easy but have you ever tried to buy liquid starch? I went to 4 places before I finally found it at the 5th place, a Walmart super center. Target, Hy-Vee, a regular Walmart and a marketplace Walmart all didn’t carry it. There is no Walmart super center in between my home and my office so I had to make a special trip out south.  My low-stress project ended up being very frustrating in trying to find the dang liquid starch!

Once I procured the liquid starch, mixing it up was actually very simple, though I wasn’t really sure it was going to turn out until the next day. I got the recipe from Little Bins for Little Hands. It’s a simple process. Mix together 1/2 cup water and a 1/2 cup washable glue. Then add in any food coloring or glitter as desired. Then pour 1/2 cup liquid starch into a second bowl and pour glue mixture into that. It will immediately start turning “slimey”. Mix with spoon at first then mix with hands.  I did this last Friday night.

So a couple notes on this project. First of all the standard bottle of glue is not quite half a cup.

If I had turned the bottle upside down and let it all run down it probably would have been 1/2 cup but I didn’t have the patience for that (it was 9:30 at night and I was tired). I topped it off from another bottle of glue we already had.

Second I used a lot of red food coloring and red glitter. 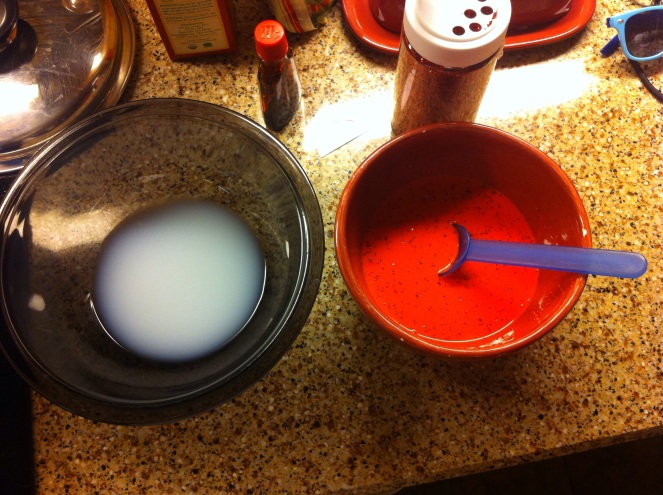 Third the slime gets better with age. When I was first mixing it it was really stringy and gloppy and I honestly thought it was going to be a bust. 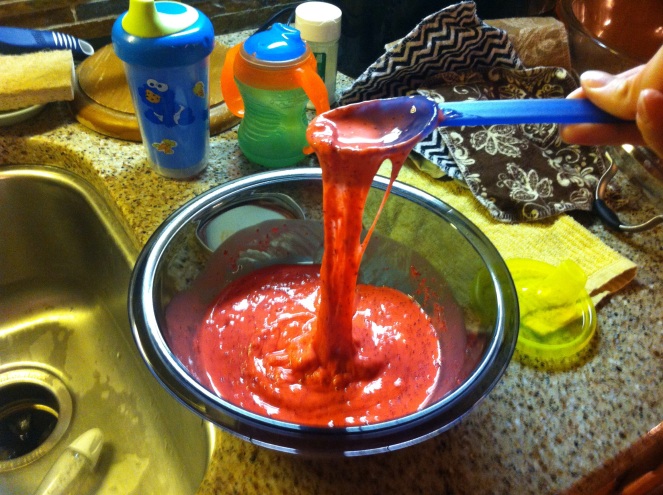 But I kept mixing and threw it in a big yogurt container and let it sit overnight. The next day it was MUCH better. Very smooth and elasticy.

Finally do not try to dry off the slime with a napkin or paper towel. I thought it was a little wet when we first got it out to play with it on Saturday so I thought I could blot it dry with a paper napkin. As soon as I laid the napkin on the surface the slime sucked it in and there was no getting it back. I tried to pick little pieces of napkin out of it but to no avail. I thought I had ruined it and would have to start over! But we just started playing with it and the napkin disintegrated into the slime never to be seen again. The slime seemed fine after that.

I let my 3 year old play with the slime in a 9×13 pan and that worked just fine.

He loved it! He played with it a good long time. The glitter came off on the pan and our hands though.

It was easy to rinse off. My 18 month old played with the slime in his high chair. I supervised him pretty closely though to make sure he didn’t try to eat it. Both boys loved putting it into little cups and squishing it to make tooting noises. Boys. 🙂

The slime was great on Saturday and Sunday.  By Monday though it started to get really sticky and wasn’t coming off our hands and cups as easily as before.  Then my older son stuck is elbow in a big slime glob and got it all over his fleece pullover.  The younger one managed to sit in some and got it on his pants.  We rinsed the clothes off pretty quickly but I can confirm this slime didn’t stain their clothes thank goodness.  I am going to do some searching to see if we can add water to it to make it less sticky.  Surely it didn’t run its course in just three days!  If I find anything I will come back and edit this post.

Bottom line though the slime was super easy to make and my kids really liked it.  The older one has already asked when we can make more colors!