Yesterday was the “snowpocalypse” here in Kansas.  It started snowing Sunday night and did not stop until Tuesday morning.  There’s snow everywhere.  And it is not going to melt anytime soon as the high temperature tomorrow is 13 degrees F (the low tonight is -5 degrees F!).  Here’s a glimpse of the snowpocalypse in my backyard: 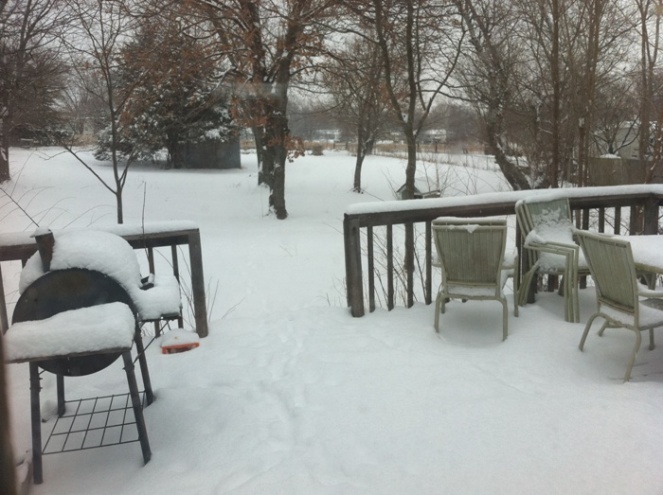 So with all this snow, all my local friends were saying they were planning on making snow cream on Facebook.  I’ve heard of snow cream before but never actually made it.  It’s ice cream you make out of snow.  Since we have plenty of snow everywhere, it seemed like a good time to make it.  And people were going on and on about how great it is.

I googled a recipe and found this simple one on All Recipes.  I made Benzo go outside and gather up some fresh, CLEAN snow using my giant mixing bowl and bring it in the kitchen. 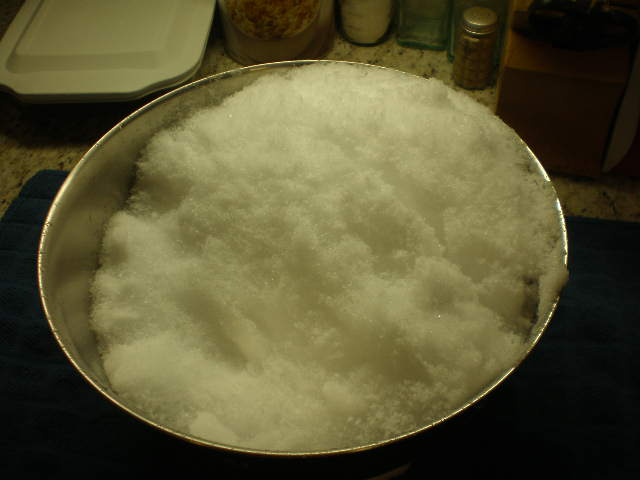 I added a tablespoon of vanilla, a cup of white sugar and about 2 cups of almond milk to the snow, just as the recipe suggested.  I stirred it all up with a wooden spoon.  It came out looking like shaved ice. 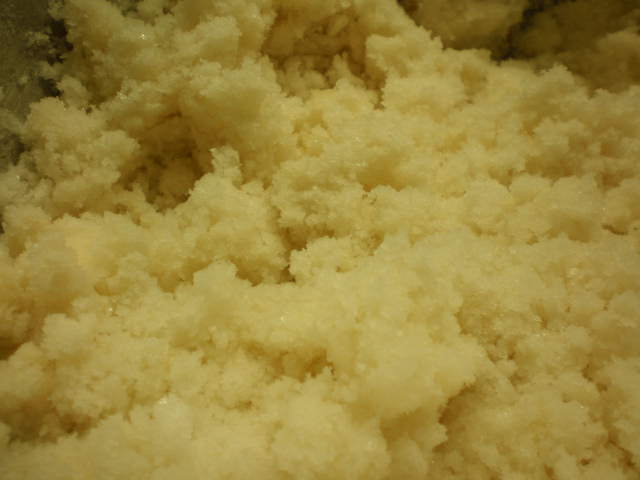 So how did it taste?  Honestly I was not blown away.  The flavor was good, but the part that annoyed me the most was that I could taste all the sugar granules.  They were a bit crunchy.  Other than that it’s just sweet ice.  Just like a snow cone.

As I thought about it today I thought that next time I could make a simple syrup and use that instead of just sugar and milk.  Simple syrup has sugar dissolved into hot water so the granules go away.

Then today one Facebook one of my friends posted this recipe from Paula Deen.  It uses sweetened condensed milk instead of sugar and milk.  I think that would be a lot tastier and would solve the annoying granule issue.

The Paula Deen recipe reminded me of Hawaii.  In Hawaii shaved ice is a big thing.  When we visited last June we ate shaved ice all the time.  The stands in Hawaii offer a “snow cap” which is sweetened condensed milk on top of your shaved ice.  I bet the Paula Deen snow cream would taste a lot like a shaved ice from Hawaii!  Funny how the snowpocalypse made me think of Hawaii.  Of all places!

So have you ever made snow cream before?  Have a stellar recipe that will knock my socks off?  I’m willing to try it again!

One thought on “Snow Cream”