And not just sweet eats but very creative sweet eats.  Like Raw Cheesecake Filling.  And not just raw but entirely plant-based too.

Katie’s original recipe is for Raw Banana Split Cheesecake.  Sounds good?  I thought so.  I made this recipe twice in one week!

Katie was kind enough to let me blog about her great recipe.  I’m dedicating this post to my friend Alisha who lives in Japan and does not have an oven.  Which means she can’t bake anything.  The horror!  Alisha, you need to be introduced to the world of raw desserts.  Especially this one.  I really hope you have a blender.

The first time I made this recipe I did not have any frozen bananas.  So I substituted some frozen blueberries instead.  Here’s how I made it:

Soak the cashews all day (I put them in a bowl in the morning before work and covered with water).  When you get home, drain the cashews.  Put the cashews and all other ingredients in the Magic Bullet (or a blender). 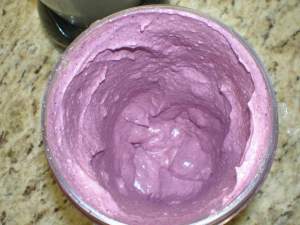 Dig it out with a spatula, put in a bowl and enjoy.  I really liked that this recipe made a small amount.  It was just enough for Benzo and I to each have a small bowl.

There were still little cashew pieces in there, but we both liked them.

A few days later I made Katie’s recipe again.  This time I had bananas so when I put the cashews in water to soak in the morning, I peeled a banana and stuck it in the freezer as well.  Make sure you peel the banana first because it is impossible to get the peel off once the banana is frozen.  Yeah I learned that the hard way.

I made her recipe exactly as directed, except I used one tablespoon maple syrup instead of the vanilla drops.  I blended everything really, really well this time.  The Magic Bullet had a little trouble with the frozen banana, but I just kept on blending and eventually it got most of it.

This time the result was a lot creamier than the first time.  Could it be the banana?  It could also be that I ended up soaking the cashews about 36 hours instead of just 12 or so.  I didn’t get to make this dessert on the day I intended so I had to make it the next day.

And since I didn’t have Katie’s hot-chocolate crust, I made homemade chocolate syrup to drizzle over the top. 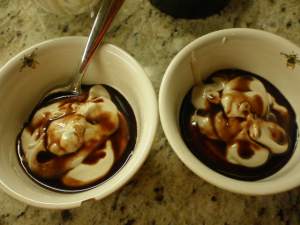 Um, YUM!  Homemade chocolate syrup is so easy to make!  Sayonara store-bought version.  I will be making my own from now on.  No more high fructose corn syrup for me!

I made a half batch of this recipe.  It was very easy and requires ingredients I always have on hand: sugar, water, cocoa powder, salt and vanilla.  I used raw sugar instead of refined and had no issues.  I brought the syrup up to a full rolling boil and then let it boil for 3 minutes.  Here it is about to boil over:

I saved it just in time, though a smidge did boil over onto the stove.  Once it was cooled I stored it in what else?  A glass jar of course!

Benzo has been making chocolate milk with this stuff all week.  Everytime he exclaims “it tastes just like the real thing!”.  I used it the other night to make a peanut butter-chocolate smoothie for dessert.  Mmmm.

Chocolate-Covered Katie – thank you so much for sharing this wonderful recipe and letting me blog about it!  The only thing keeping me from making this every single night is that I have to soak the cashews ahead of time.